So I got in the cafe with a bit of a dramatic entrance, sat down to catch my breath and calm my nerves down… Felt much better and definitely safer!

This reads best as part of a series so pop back to Camino de Santiago Part 1 and 2.

A gentleman who appeared to be hiking the same route as I approached me and started making some small talk, I didn’t mind. He was telling me how he is going to stay over and not walk the rest of the day as the next town is closed, he was giving out some friendly advice that if I’m going that way I should avoid that town as there would be no accommodation… I just smiled, nodded, and thanked him for the tip. He paid his bill and seemed to have left to the lodge above the cafe.

I finished my pineapple juice, the lady behind the counter didn’t quite understand my English when I said I wanted orange juice so I ended up with pineapple which is fine…

Side note; if you ever end up in Galacia Spain you must try out their freshly squeezed orange juice… it’s like no other in the world! I don’t know how they grow their oranges but they do a heck of a good job at it.

I picked up my gear and chose a route that involved walking along main roads and as populated as possible areas even if it was to take me slightly longer to get to my destination, I just felt a tad more comfortable with that.

I walked and walked, it was a long walking day. The hotel that I had prebooked was about 3 Km off the Camino de Santiago. So I was to walk to the next town and then have a lift to the hotel.

The day was grey and cold but the scenery was nice, the air was fresh and I was there pretty much alone with my thoughts… It was much nicer than the morning part of the day, so no complaints from me here but little did I know…

I sat briefly to rest my feet, it was in an old bus stop shelter. I watched the cows graze and tried not to freak out when a dog came up to me, looked at me up close then walked away.

In the corner of my eye, I could see someone walking towards me, I felt it was a bit strange. It’s a walking route so obviously, people will walk along with it but it was strange as it was the same guy that came up to me in the cafe earlier.

He wasn’t going to walk so I started to feel a bit uncomfortable here… Now it might have been a completely innocent thing. People can change their plans but after the morning that I had, I was on super alert and super suspicious of everything and everyone!

I got up and started walking, I thought if I just kept going we’d have about a couple of hundred meters between us and it’ll be okay, I just needed to get to the next town and I’ll be okay.

Well, he caught up with me.

Again, on a different day, I may have had a completely different reaction to this. You might be reading this and thinking I’m overreacting but in the context of this being my first true solo trip, I’m walking in an off-the-beaten-path area in low season and having had a good going scared in the morning. I think feeling chased and a bit vulnerable was fitting in this scenario. 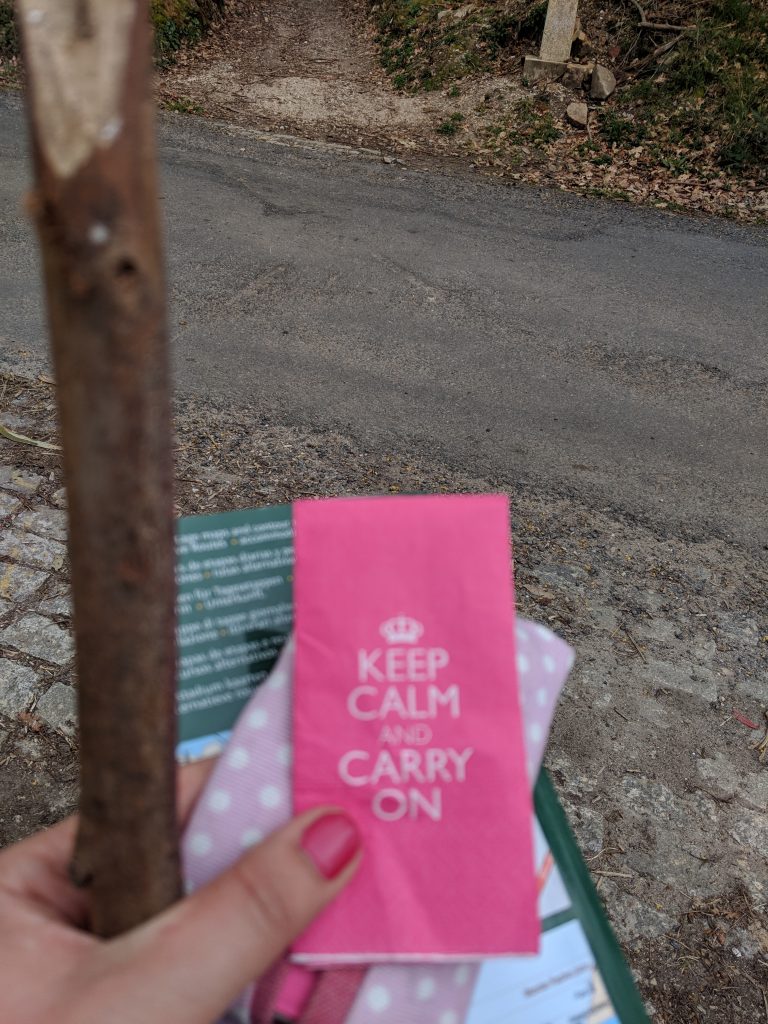 I just kept going, it’s not a time to break down and fall apart. I just had to keep going and keep the faith that I’ll be okay. I did make sure that my Life 360 app was active, that’s an app that sends a GPS signal to whoever you choose so they’d always know your whereabouts and you can send out an emergency message at a click of a button. It’s very useful to have when you’re traveling solo.

My unsolicited Camino de Santiago company was probably in his 60s, fairly well built, greyed out hair in a ponytail, in very funky style glove footwear, a small backpack, and a very thick tree branch using it as a walking stick… All I could think about was my tree branch of a walking stick is way smaller than his, it was more like a twig than the one that he had. It’ll break straightaway if I needed to use it for self-defense. I made a mental note to find a thicker tree branch and try to stay out of trouble!

He went on and on talking about himself, how he started his journey of walking from Sweden or Switzerland, can’t quite remember now. He was walking for four months from his home country to Spain, he wanted to complete the Camino de Santiago and reach the end of the land. He told me how he had issues in his life and hated doctors (I felt grateful that I hadn’t blabbered out that I was one, phew). He was getting the conversation into a personal turn and asking me all sorts of questions that completely weirded me out and I didn’t want to carry on the conversation but he just wouldn’t get it. So I carried on in silence and eventually, he got the message and stopped talking.

Get the free Solo Travel Guide

I found it difficult to tell him to walk away or leave me alone, I would have normally done so in my own/in a different environment but out there in the middle of nowhere. I just didn’t know how the reaction would be and was trying to keep it calm and controlled as much as I could. It seemed to have done the trick.

My experience and learning from this solo trip are all condensed for you in the free solo travel guide, check it out for your next solo trip.

After a few miles, he decided to take a break, and although I was dying for one I decided to keep going. And kept walking so eagerly to get to my next stop.

I didn’t want to worry anyone by calling them, there’s little that they could do when they’re miles away but I did put out my location a few times on my social media, I made sure I had the number of the police handy and my panic alarm was handy too.

I had a friend that was joining me the following day, I made videos of my route and sent audios of where I’m heading towards and sent it across to him, just in case he arrives and doesn’t find me… I was hoping for the best but definitely preparing for the worst!

I got to the second town… That chap was still behind me, there was a reasonable distance between us but I still couldn’t stop walking and I didn’t want him to figure out which direction I was going in so when I reached a fountain in the middle of a small square as I entered the town I ducked behind the fountain and slowly moved behind the small fence to one side and sat behind a little lodge and called for my ride.

He was right the town was closed so I wasn’t sure where he was heading. My ride arrived within a few minutes, a pleasant young lady drove me to the hotel.

I was praying for a bed and a shower, if there was a bath then that would be a bonus as I was so sore and tensed up I really needed to unwind, but I was like a shower would still be okay, I don’t want to be too greedy. She showed me the way to my room, my bag was still in the lobby so I had to carry it up two flights of stairs, got in the room and walked to my bathroom, my jaw dropped as I saw not only a shower, not only a bathtub but a jacuzzi! I’ve always believed in a God and that moment affirmed it more!

Dinner was lovely, I can’t remember the name of the dishes but they were a special Camino menu.

A hot jacuzzi bath and then bed recharging my batteries to face the next day. 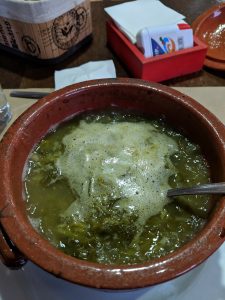 The Camino doesn’t only have its physical challenge, it has its emotional challenges, definitely mental ones of being all alone with your thoughts and the biggest challenge of the unknown and how to deal with it. I have definitely learned a lot about myself during those days, about perseverance and feeling the fear yet going for it!

And it’s been a great start to months of solo travel that followed. 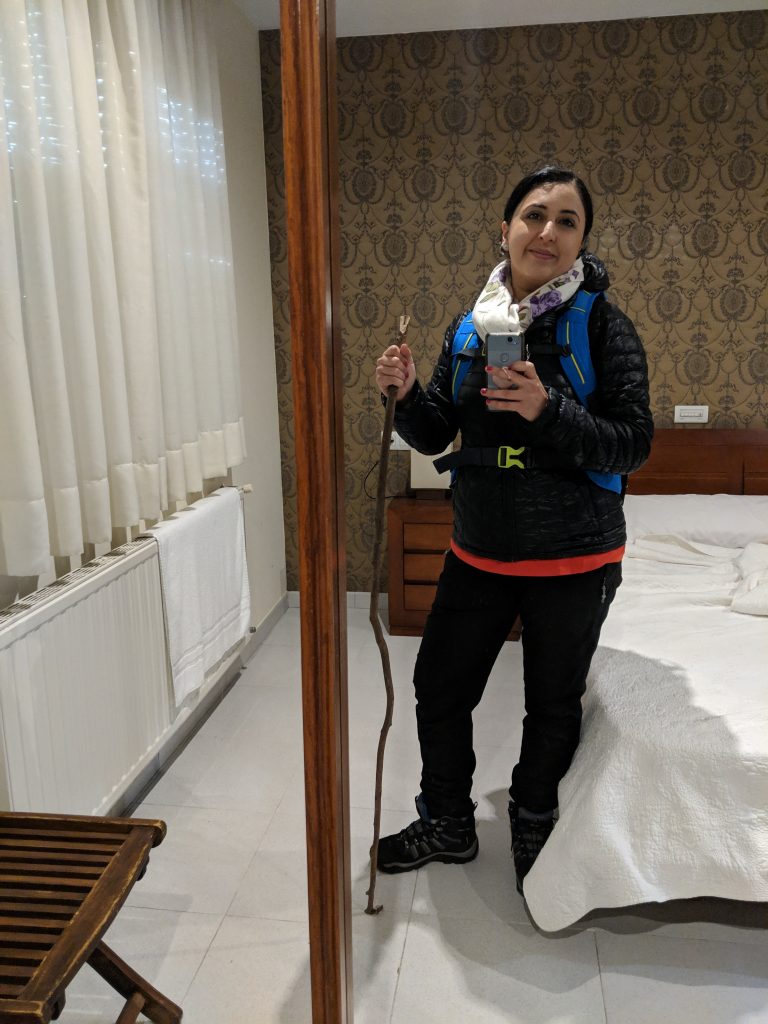 Not sure about traveling solo safely – can it be done?

Check out my traveling solo safely guide, packed with tried and tested tips and tricks to keep your safe and sound

Get the Free guide

I hope you did because each week I put my heart into making sure you get some great tips so you can rock it in your travels and business while creating a life you love.