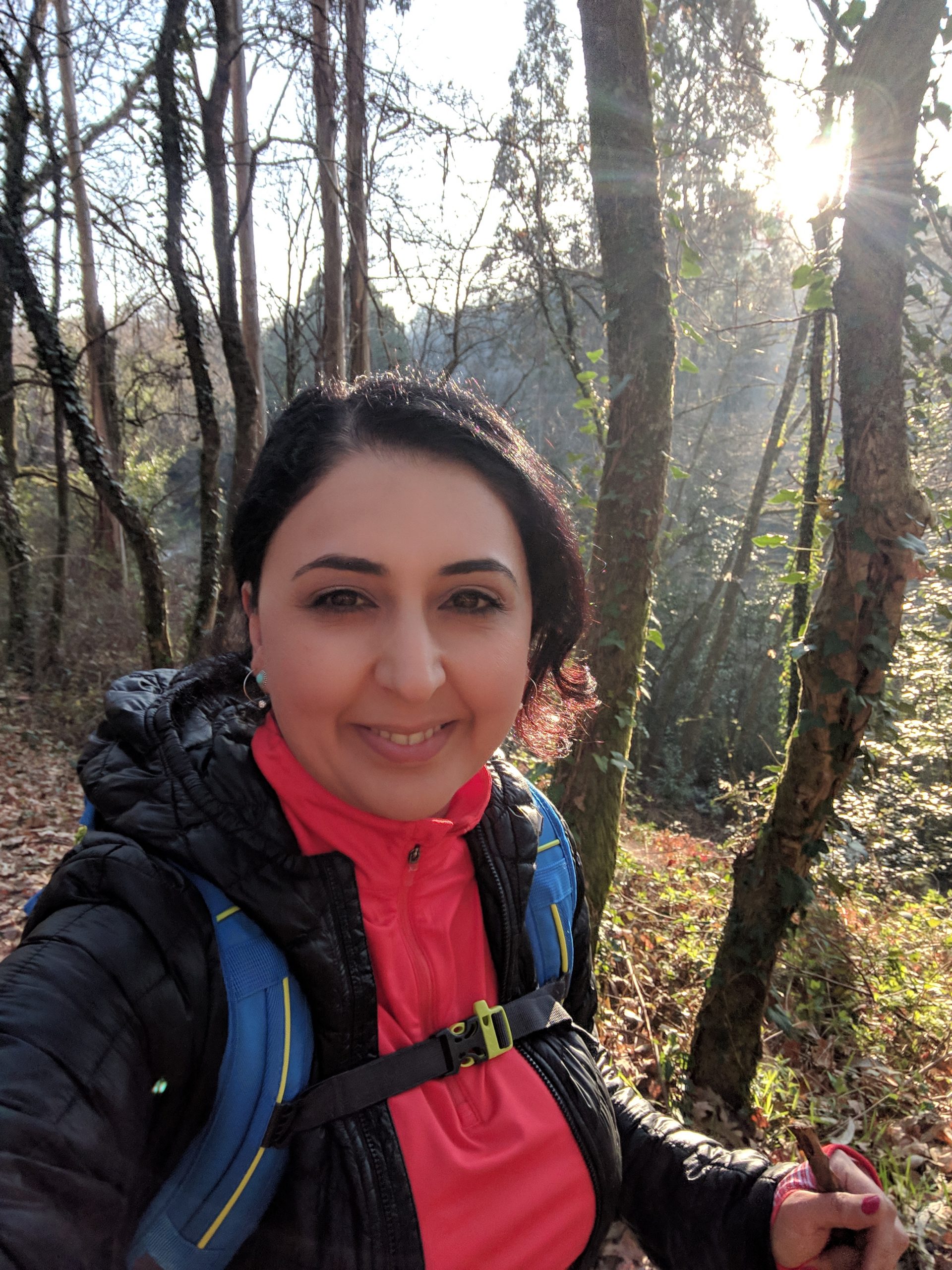 Who else thinks/thought that walking is the same as hiking?

On some level in my head, I thought if I’m a walker I can easily become a hiker…

I learned the hard way it’s not the same!

I had this need for a mental and an emotional clear-out after a long journey battling life and its adversities.

If you want to know the background to that, check out My Story.

That’s how I basically ended up hiking a section of the Camino de Santiago, from Santiago to Finisterre and then to Muxia, a 117Km distance in 8 days whilst being a walker by nature, not a hiker. 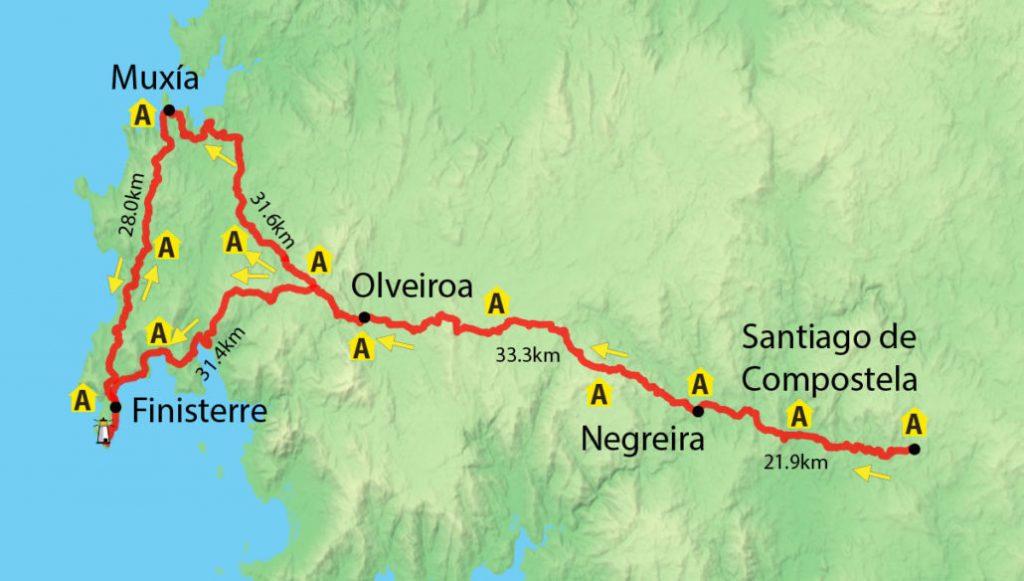 Taking on new challenges will help push past the old ones and make you grow from it and grow your comfort zone.

I reached that conclusion after I finished the trip, not on day one, obviously.

On day one, I actually got lost within the first minutes of setting off! I had my guide book and maps and I was planning to do it in a non-Google assisted way.

That lasted about 5 minutes, then I got frustrated with being lost and not knowing where North is.

I pulled out my phone and Google navigated my way in the right direction! Soon after I caught sight of another hiker and one of the route landmarks and was reassured that Google knows everything 😉 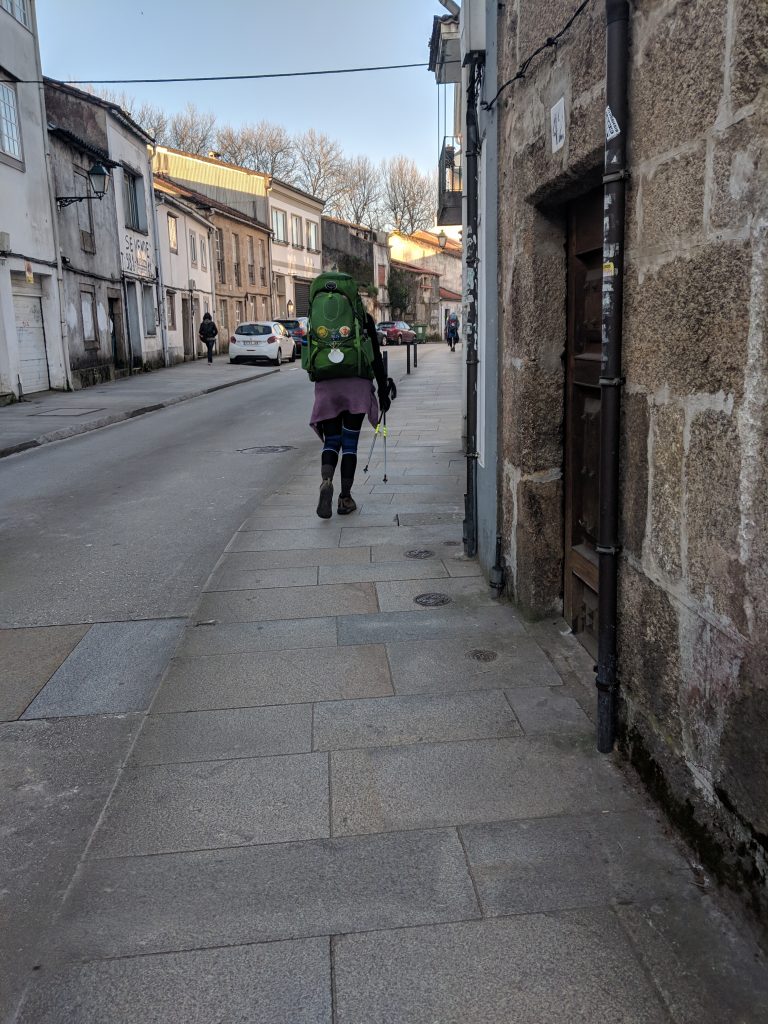 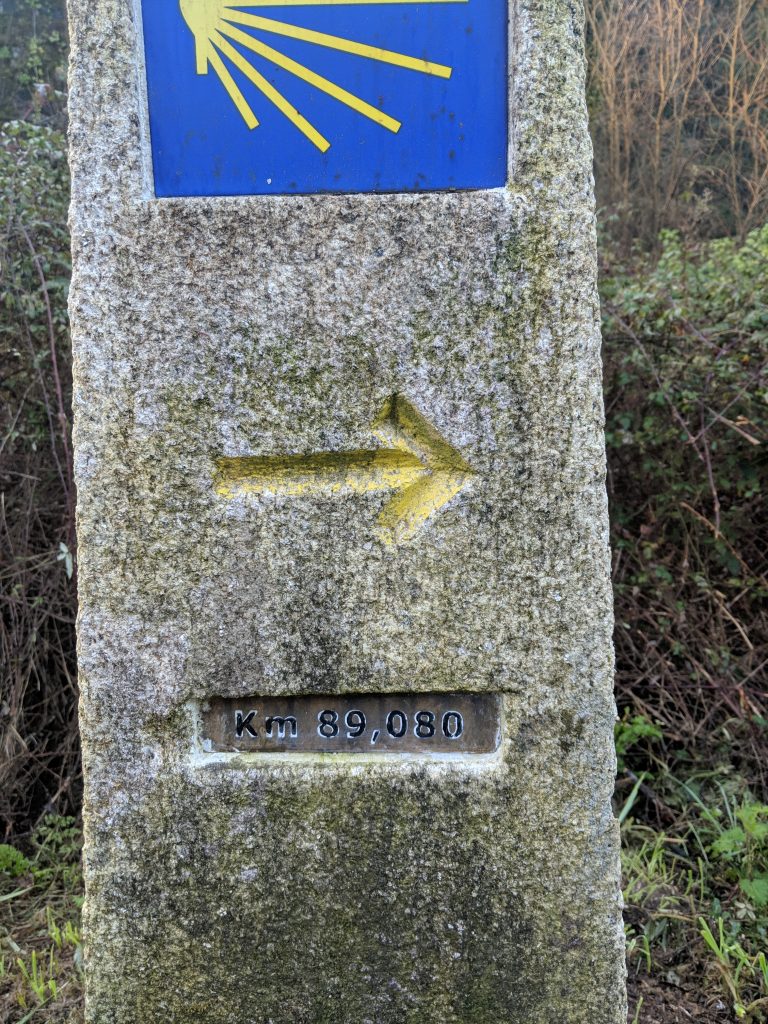 It does sound a little crazy now that I set off on an 8-day hiking journey with little prep but trust me the best experiences in life happen that way! I love that I have done it and love what I got out of it…

On my first day, heading out of Santiago, the sun was shining, the scenery was stunning, the air fresh, I was all alone walking in the woods…

Very peaceful and serene, yet the physical challenge on the first day was very real.

So even if I wanted to stop before my planned destination I wouldn’t be able to.

That helped push me through the physical pain and the mental barrier that I cant when I actually could.

Check out Camino de Santiago – Part 1 for information on how to plan your Camino hike.

I got to my first stop, a little lovely cozy hotel in a town called Negreira. I got in dying to have a shower and a lie-down.

My bag hasn’t been delivered!

After a couple of phone calls, the glitch was sorted and the driver showed up with my bag.

A hot shower, a hot water bottle (yes I’d taken one with me as well as a travel kettle), and some tiger balm and I were fast asleep.

Chllenges of day one tackled. Yes. 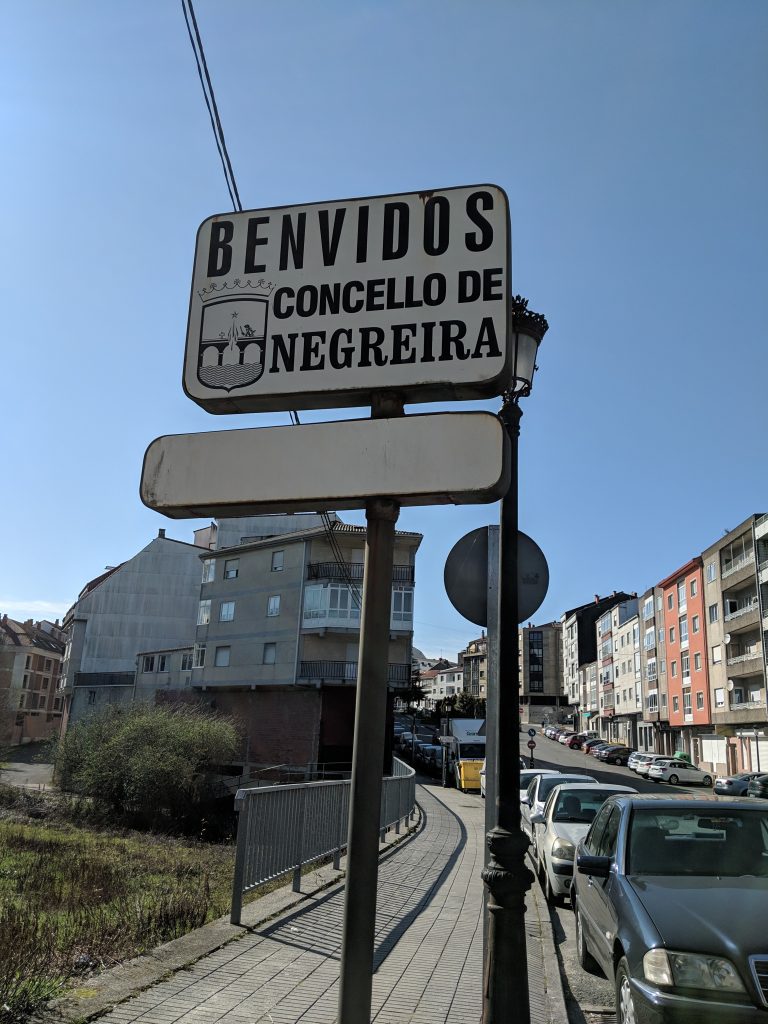 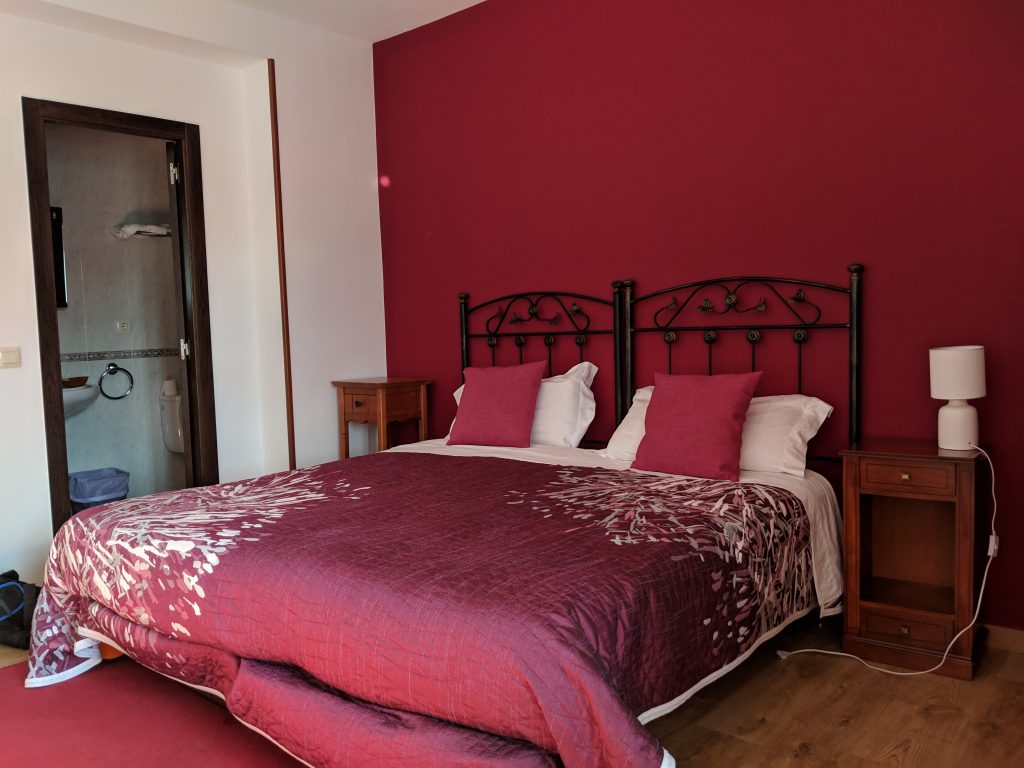 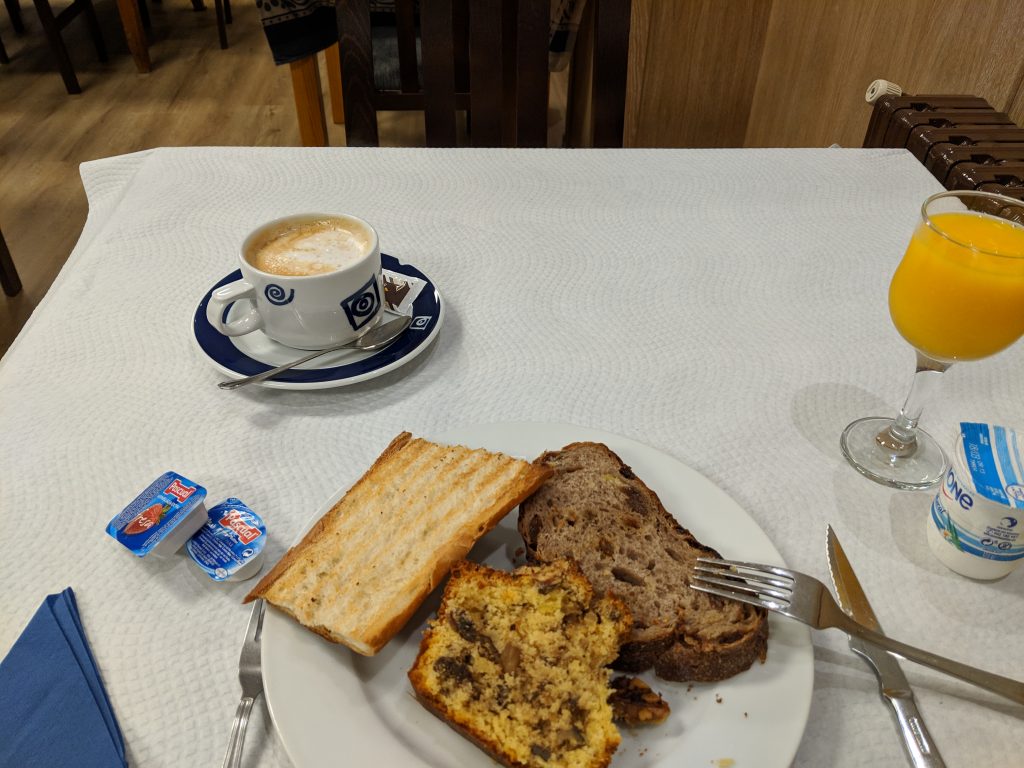 The soreness I felt in the morning was unbelievable.

like having had a good going work out where muscles you didn’t know you had hurt, but I had to keep going.

I was just getting started and like they say ‘pain is temporary, quitting is forever’.

The breakfast at the hotel was made for champs, a really good quality bakery, and cooking (pic above)… It fueled me for the day ahead.

I walked again through the woods with amazing scenery, the weather was less kind than the day before and I had to pull out my poncho for a few hours of the walk…

That however wasn’t the worst bit of the day or the trip.

Keep reading the twist of events below.

As I was walking through a farm coming up to a big road that separated the farm from the woods, I saw a man coming out from the woods and walking down to the road.

Now that might sound benign and not worth noting but it’s what I noticed next that gave me the creeps.

His outfit wasn’t that of a hiker or a farmer. He was dressed in smart trousers and a bomber’s jacket which is completely out of context with the surrounding nature.

That made alarm bells go off in my head.

He was walking down towards his car which again was a city car, not one you’d drive in the kind of woods/farm/trail area that we were in…

It all didn’t look right and didn’t feel right.

By the time he got down to his car, I had already crossed the road and was about to get into the woods.

I tried to act normal and not show vulnerability, he kept looking my way which continued to creep me out.

When he got to his car instead of driving off, he opened the car boot and reached in to get something out with both hands.

That was the moment where my frecking out went off the charts and I said to myself I’m not hanging about to find out what he’s pulling out of the car boot nor in which direction he’s headed with it!

I ran! I ran into the woods as fast as I could.

I ran despite the sore feet and achy muscles.

I was planning a nice break in the woods but that plan changed quickly and I ran literally as my life depended on it. 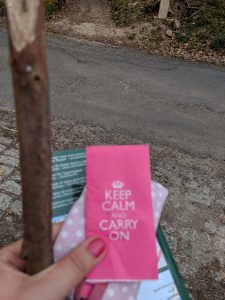 I tried to tell myself to keep calm and carry on but the thing is when you run in the woods, you make a lot of creeky noises that can illusion you into thinking that someone is running after you, so I kept running and looking back behind me.

It was like one of those horror movies, all I could think is that this couldn’t be the end of me!

I stopped briefly to post this picture on my social media, just a ‘last seen by’ photo, you know, just in case.

As I posted it, I heard a car approaching. 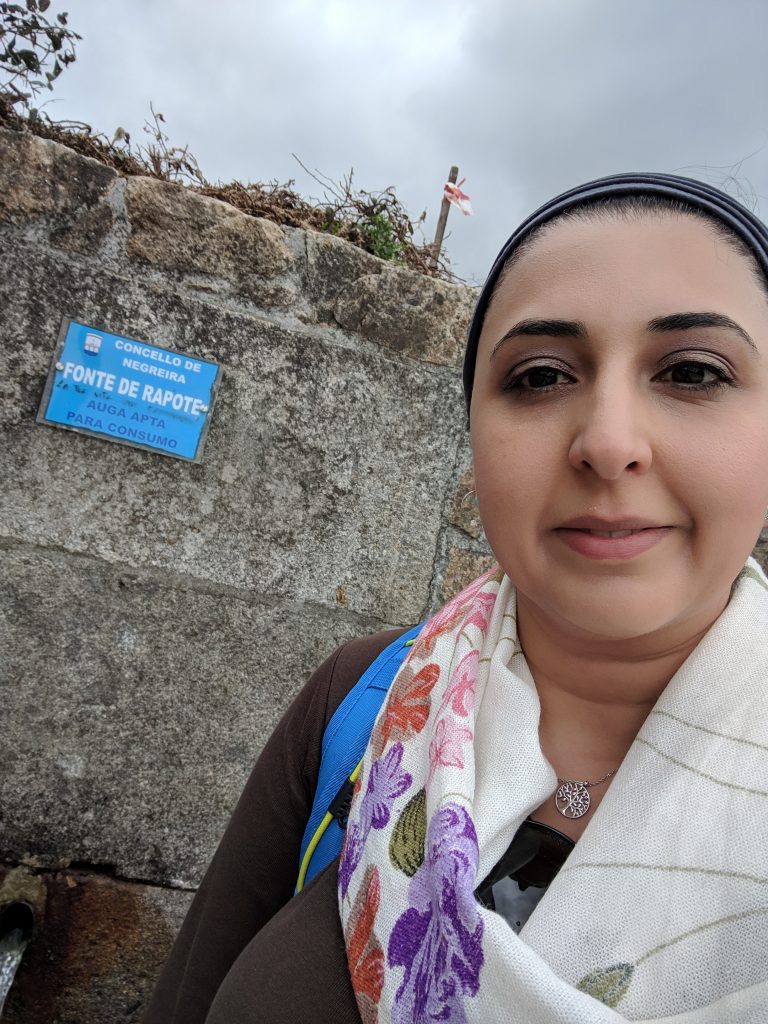 In the distance there was a sign for a cafe, I didn’t stop till I got there.

I pretty much ran in, pulled up a chair, and said to the old lady behind the counter I’ll drink anything!

She was pretty confused with my dramatic entrance.

Stay tuned for my next blog to find out what happened.

I hope you did because each week I put my heart into making sure you get some good tips so you can rock it in your travels while creating a life you love.